We had a nice visit with Joan’s youngest brother Billy, his wife Ellen, their daughter Katie, and their son Aiden. Enjoy this visit with us by clicking here.

We left New York with the intention of visiting the National Aquarium in Baltimore, but we never got there. On the way, the left rear axle of Winnie, our faithful trailer, had a wheel bearing fail, the trailer equivalent of breaking a person’s left knee. Stu pulled into a Walmart parking lot, feeling that something was wrong, and the wheel fell off the trailer in the parking lot. We decided that we needed to get to a campground while we got parts and repairs for the trailer. We limped to the neared campground, which fortunately was in Jersey City, on the Hudson River, a short ferry ride to Manhattan.

We were there for 4 days, trying to get Winnie repaired, but the parts sent by the manufacturer, arriving on day 3, were wrong. Still, we did get to enjoy New York City,

Finally, Stu was able to get the trailer to the point where we could safely drive to Franklin Trailer in ?? NJ where the owner of the company intervened, and had his highly skilled technician stay late to make Winnie’s wheels and axle like new.

We revised our plans because we did not want to miss Joan’s Aunt Jeanet’s 100th birthday gallery celebration on August 7 in Greenville SC, so we eliminated our plan to visit the Shenandoah National Park and headed straight for Charlotte NC, on the way to Greenville, to visit Joan’s niece Ariel and Ariel’s precious 3 children, Natalie, Zack, and Bennie. They were a joy to be with.

The next highlight of our trip was a visit to Joan’s Aunt Jeanet Dreskin who was  about to celebrate her one hundredth birthday. As part of a celebration, she had a very well attended art show, showing many of her later works. Join us at the 100th show by Clicking Here.

20210808 The next morning, Sunday, we met up with Rick and Hedy Dreskin, Joan’s cousins, in downtown Greenville, a revitalized city with a clear vision of the future. The tour centered on the Falls Park and the Wings of the City display, a series of bronzes created by  Jorge Marín, a Mexican artist.

We got to have lunch with Hedy and Rick at the lovely Jianna restaurant before we had to say goodbye, and head for the Charleston, SC

20210809 0810 Sunday night found us at the James Island County Park. Trees, water park, campground, and a large picnic area only start to describe this lovely oasis in Charleston. The next morning we drove to the downtown Charleston Visitor’s Center, parked, and asked about an audio tour of the historic area.

The people at the visitors center knew of no such tour but Google did. We signed up for the narrated tour that included restored homes, churches, and public buildings. I was especially impressed with the restoration of the Planter’s Theater retaining the original feel while installing modern elevators, lighting and restrooms that were so well cared for, I was afraid to dry my hands on the ironed towels. 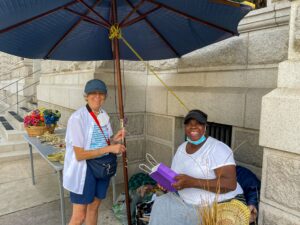 Joan bought a flower from a street artist who was sitting in the very spot where  Supreme Court Justice Thurgood Marshall argued that “all segregation is unequal” in the Brown vs Board of Education case that began the legal justification for ending public segregation, a scar of shame on our country.

I was moved to find the sign remembering Thurgood Marshall’s brave act. I was even more moved when Dori, the street artist, recounted the story of the beginning of the end of the United States’ great shame, and how the Federal Chief Judge on the Brown case was run out of town.

Lunch at the Amen Street Fish + Raw Bar was another highpoint of the day. Joan continued her quest for a perfect crab cake with a nice salad topped with a crab cake in the running. Joan hasn’t published her selection, but Stu found his sample taste of her lunch just below Jeanet Dreskin’s homemade crab cake a few days earlier. Are there degrees of excellence?

Our next stop was Fort Clinch State Park in Fernandina FL. It was constructed during the War Between the States to protect Florida from the secessionists in Georgia. It was garrisoned in the Civil War and the War of 1812 and “never fired a shot in anger.” It was, and is, beautiful sitting on the banks of the St. Mary river overlooking nice beaches, boats, and fine fishing.

Our final stop was in Titusville, at a campground just across the Indian River Lagoon from the Merritt Island Wildlife Refuge and Cape Canaveral.

This was our last night of the 2021 Summer adventure. We returned home to catch up on appointments, read mail, pay bills, and visit the physicians and dentists who have been waiting for us. We miss home, and we miss the adventure of traveling.