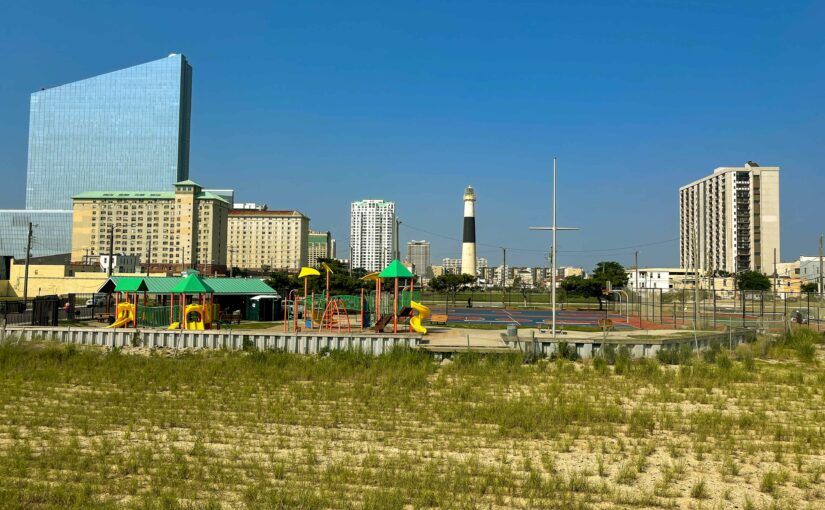 Stu awakened early on July 27 and went for a ride on the Atlantic City Boardwalk. Atlantic City was devastated by three separate “acts of nature”: a very destructive hurricane that flooded and destroyed many buildings, roads and infrastructure, severe overbuilding of casinos caused by greed, and COVID that forced many of the remaining small business to close down.

The result was depression that triggered opportunity. The City removed the severely damaged buildings and in doing so removed many of the places the homeless hung out.  Large parts of the blighted city are now open space with grass and city parks beginning to bloom in place of the blight that existed previously. Whole city blocks are grass with a few parks and an occasional fully restored clean, neat house. The houses in an island of grass presented themselves as an opportunity. In a few areas, builders bought up entire blocks and built neat single homes with 2-car garages and off street guest parking.  One resident said they originally sold for $208k just a few years ago when new.

In other places in town, owners had redeveloped blighted houses into small mansions facing the beach with pools, tennis courts, and even a private miniature golf course. I saw three apparently homeless people. Two were sleeping on benches and one was doing push ups – more than I’ve done in my lifetime – alongside his bicycle. This area is a paradise waiting to be developed by someone who sees the potential of the beautiful beach and open spaces..

The beach was spotless. There was cleaning equipment making sure the lines along the beach ran parallel to the water – except at the frequent beach volleyball courts where the lines had to parallel the nets. The bathrooms surprised me the most. The dingy, dirty public restrooms that made Atlantic City a place where “you went first, before leaving home.” Each restroom was fresh, tiled, spotlessly clean and well supplied with electric touchless faucets and full soap dispensers. When I bicycled by about 8 in the morning, there was a cleaning crew for every second bathroom. I stopped to chat and they said two shifts of cleaners work all day going back and forth between the rooms to keep them spotless. Each restroom and outdoor showers and separate private changing rooms. Atlantic City has clearly decided to “clean up their image” and make the beach family friendly again.

Later in the day, we returned to Brigantine to have another dinner on the beach, a near repeat of the one we enjoyed a few days ago,