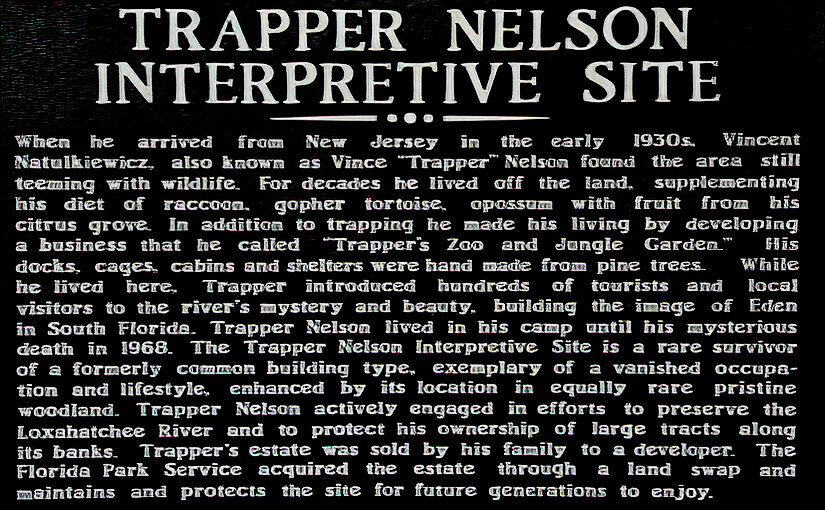 On the way home from our Daytona Speedway adventure, we stayed overnight at the wonderful John Dickinson State Park campsites, and enjoyed the following day in the Park before we headed home.

Our first stop was a 25-passenger narrated pontoon boat ride and tour of Trapper Nelson’s restored campsite. The beautiful three-mile trip up the Loxahatchee River can also be navigated with canoes or kayaks, which can be rented at the Park. We took the tour boat up the Loxahatchee for a 40 minute narrated ride.

Trapper Nelson came to live here in the early 1930’s as a trapper and fur trader, building the log cabins himself.  He lived off the land at first, then turned the 800 acres he owned into a tourist attraction from the 1940s until 1960. He’d wrestle gators and wrap himself in snakes to entertain his visitors, and earned the name “the Wildman of the Loxahatchee.” Trapper was forced by the state to close his attraction to tourists in 1960. After that, he became a recluse and little was heard about him until he was found shot to death in his remote camp on the Loxahatchee in 1968.

Trapper’s land was acquired by the Florida Park Service after his death and incorporated into Jonathan Dickinson State Park which now protects this “Wild and Scenic” designated river and Trapper’s former homestead. Most of his hand-built docks, cages, and cabins still stand on the site.

Trapper Nelson operated a “hotel” (rustic cabins) on the grounds for several years. There was no reliable transport for the guests to use (accessible only by boat) and no real roads in the area. He bought and refurbished a jeep to pick up his guests.

Next we walked to and climbed the Hobe Mountain Tower, for a view of the ocean, the Intracoastal Waterway, and the entire park.

The “mountain” has the dubious honor of being the highest natural point south of Lake Okeechobee – at 86 feet above sea level.