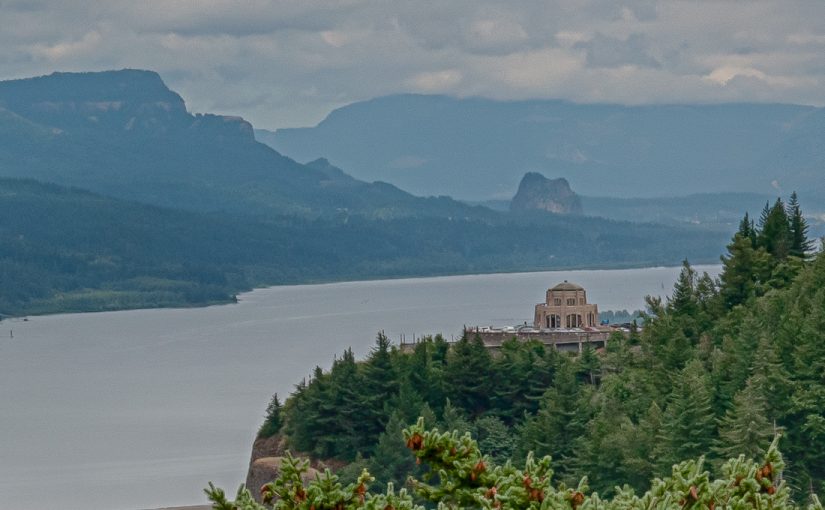 [NOTE: You can click on any photo to see it enlarged.]

On the previous leg of our journey, Joan had flown home and Stu had driven our rig to Portland OR where he stored Winnie for a month and flew home to Delray Beach to rejoin Joan. Winnie waited patiently in Portland where the cruise was to deliver us.

We flew to Spokane, the starting point of our cruise, arriving very late after a cross country trip and a three-hour time change. There are a few Davenport hotels in Spokane – at least three, all named Davenport. Our Uber driver finally settled in on the one that had our reservation. We enjoyed three days in beautiful Spokane before the cruise began.

As we waited in line to check in, three people went by to catch a shuttle to another hotel because the Historic Davenport Hotel was oversold. We were pleasantly surprised when the desk both had a room for us. They also had a one-night reservation for Sheila and Bob.  We were very hopeful.

The hotel is a lovely, very old, fully restored building. Several places to sit, lots of things to buy, and extensive antique decoration. 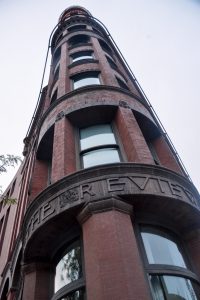 The first full day we took a walking tour of the city. The Review was a major force in the early city before its merger with the Sportsman to become the Sportsman-Review. The early architecture of the city was dominated by the Review Tower and later the complex of buildings that produces the newspaper.

Newspapers, churches and Government Buildings usually mold the architecture of a city. Spokane was especially fortunate by having early water projects, including flour mills and electric generation become the center of a growing city.

Riverfront Park along the Spokane River

Just a few blocks from our hotel was the Spokane River, with the Riverfront Park on its bank. The river is known for its waterfalls, the second longest urban falls in the US. The SkyRide Over the Falls is available at the Park to view the Spokane Falls from up in the air. It’s a 15-minute round-trip ride with a 200-foot gradual drop as it approaches the falls.

A City that Treasures Beauty: Flowers, Sculpture, and its Old Buildings

The city clearly treasures its flowers, which are everywhere and beautifully maintained.

On its 40-mile paved Centennial Trail along the river, the Riverfront Park section has 21 different sculpture area.

The art deco City Hall building is being painstakingly re-painted. 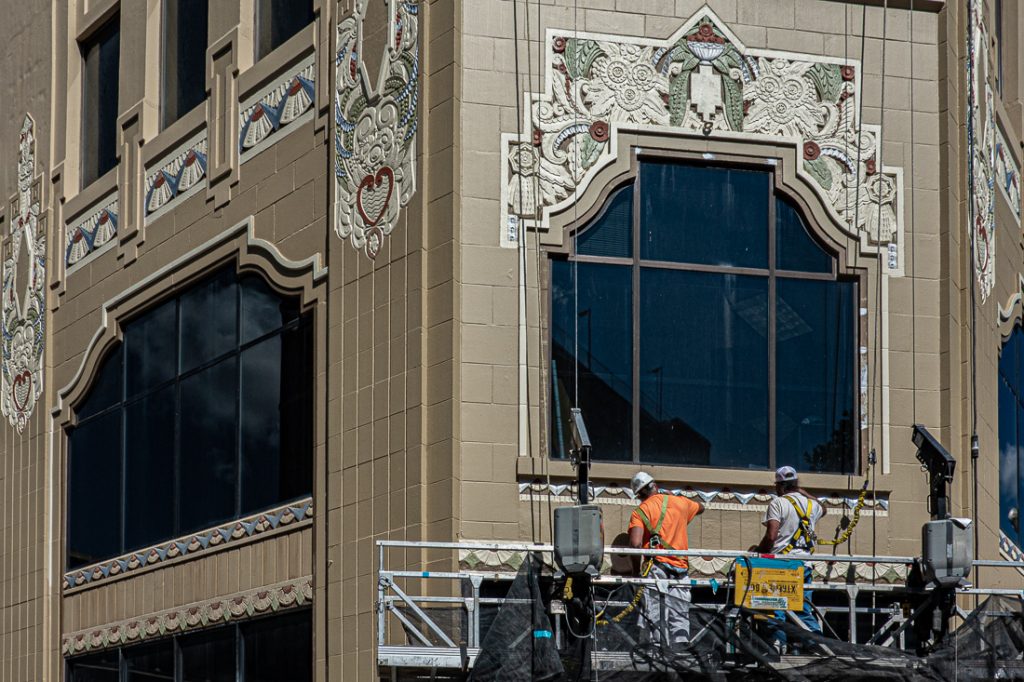 The Steam Plant is a restaurant that has been built inside the original steam plant building where they generated the city’s electricity years ago. The steam plant smoke stacks, steam machines, and cat walks surround the restaurant.

The Steam Plant was in use as a steam plant to generate electricity and heat for nearly 70 years and was shut down in December of 1986. Rather than gut the building, its unique interior was used in the renovation, saving as much of the original machinery as possible. The four massive steam boilers have been converted into restaurant seating and a waterfall/wishing well. The 1,200-ton coal bunker has become high-tech office space suspended from the ceiling. One of the stacks is a visitor attraction, while the other stack houses a conference room in one of the office spaces.

July 20: Departing on the cruise

Bob and Sheila Bell, Stu’s brother and sister-in-law, arrived in Spokane the night before our cruise departure. After a chaotic breakfast in the Davenport Hotel, the four of us, and everyone else staying there before the cruise, climbed on several buses and were driven to Clarkston, where our riverboat, the Song, awaited us.

We boarded the , and departed on the Snake River, heading for our first destination, Richland, WA. The first order of business was to lock through the Lower Granite Lock and Dam.

We took a morning walk through the town.

For our afternoon excursion, we took a 15-minute motor coach ride to the REACH Museum. Exhibits showed how this Hanford region was transformed during World War II as part of the top-secret Manhattan Project. The task was to produce materials for the nuclear weapons that ended the war. 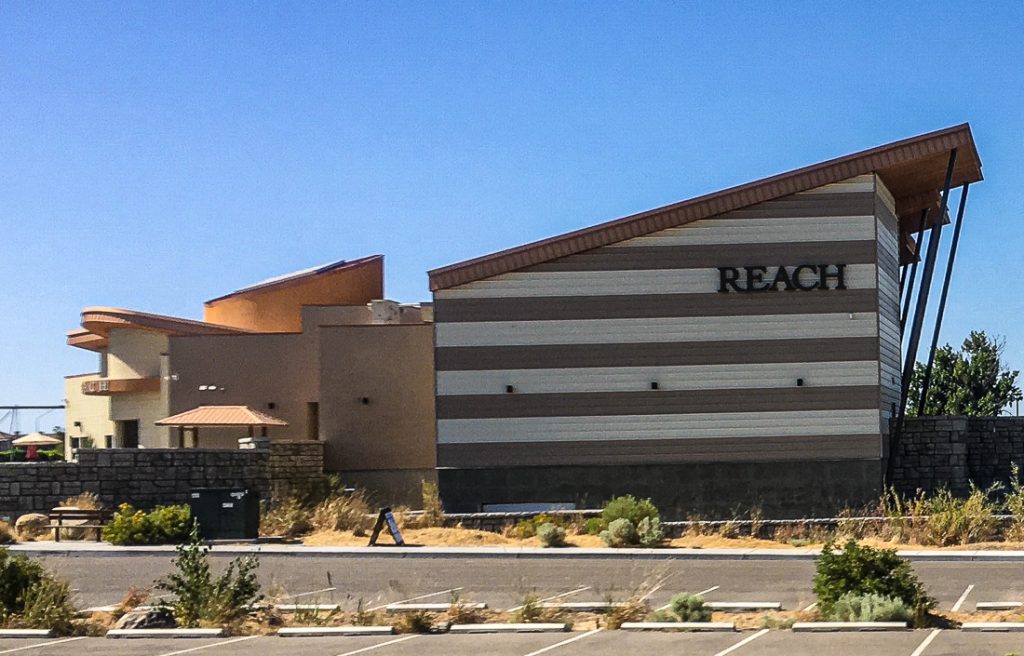 Sunset was always a time to be on the top deck of the boat.

We awoke the second day as the ship was docking at the city of The Dalles in Oregon. We had breakfast in the ship’s dining room with Sheila and Bob, and everything was normal – but one of us would change our appearance dramatically before the end of the day. 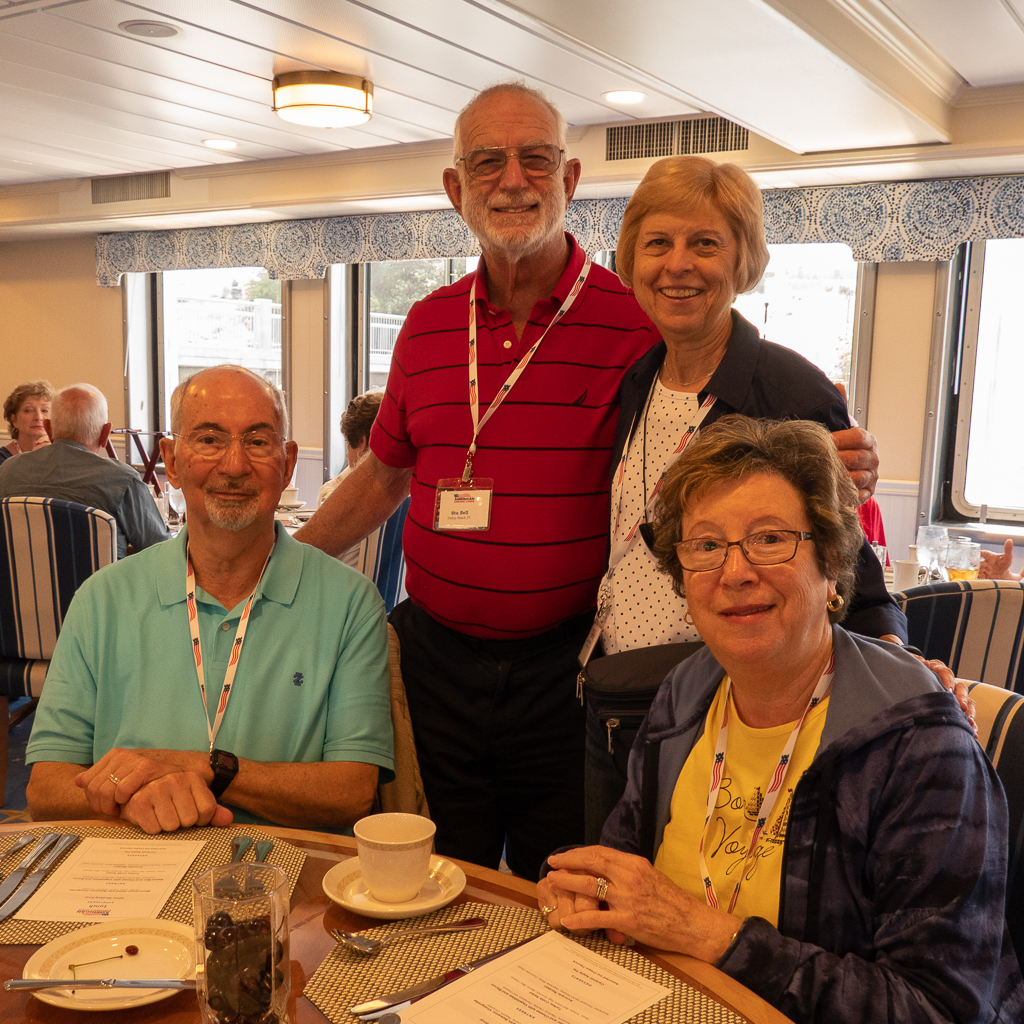 For our morning excursion, we took the ship’s shuttle to the Columbia Gorge Discovery Center.

Our after excursion was a walk into the historic downtown of The Dalles, where we were fascinated by the Neon Sign Museum with 20,000 square feet of “electrifying” exhibits. The first neon sign in America, invented by Georges Claude, was displayed in 1923 in Los Angeles. The sign, “PACKARD,” advertised an automobile dealership. Neon rapidly became an important part of sign advertising.

When we left the Neon Museum, Stu said let’s find a barber. He had decided to get a shave like his brother’s, showing his cheeks for the first time in his adult life. Neither I nor any of his children had ever seen him shaved.

Day 3 gave us a frustrating morning, but a wonderful afternoon.

Our ship had left The Dalles at 6 a.m. with a scheduled arrival in Stevenson at 9:50 a.m. The cruise lines should have planned an earlier departure and arrival so we could have a full day in Stevenson, but they did not, a circumstance that we encountered throughout the cruise. The cruise line felt no obligation to maximize our excursion time. Instead it cut that time short too often.

Because of the 9:50 a.m. arrival, our buses could not depart for the 30-minute ride to Multnomah Falls until 10:30, and then we were told to be back at the bus before noon for the ride home. American Cruise Lines (ACL) called this the highlight of the trip and then gave us just an hour to be there. We were furious, and very disappointed that they didn’t combine Multnomah with all the other wondrous falls in the area on day 7. Still, it was a beautiful place to be for an hour.

When we got back to the bus for the ride home, there were no seats left for us. The first bus had left with 2 empty seats, and that left no seat for us on the second bus. We were offered a place on the floor if we didn’t want to wait.  We elected to wait another 1/2 hour for a van to come get us. So annoying.

The afternoon excursion was wonderful, a trip to the Bonneville Lock and Dam. The Ranger-provided tour explained that this dam, and other dams on the Columbia River, were operating at 75% to 85% capacity so the spillways could be kept partially open, permitting newly hatched fish to complete their journey to the ocean. The generating power normally provided by the dams was, instead, provided by coal and gas plants.

The fourth day of the cruise was another day where ACL cheated us out of excursion time by planning to have the ship arrive in Kalama at noon, not bothering to leave Stevenson until 6:30 that morning. The afternoon excursion, fortunately, was very special, a trip to the Mount St. Helens volcano. The 90-minute motor coach ride included a movie about the devastating 1980 volcanic eruption. The mountain literally blew its top. 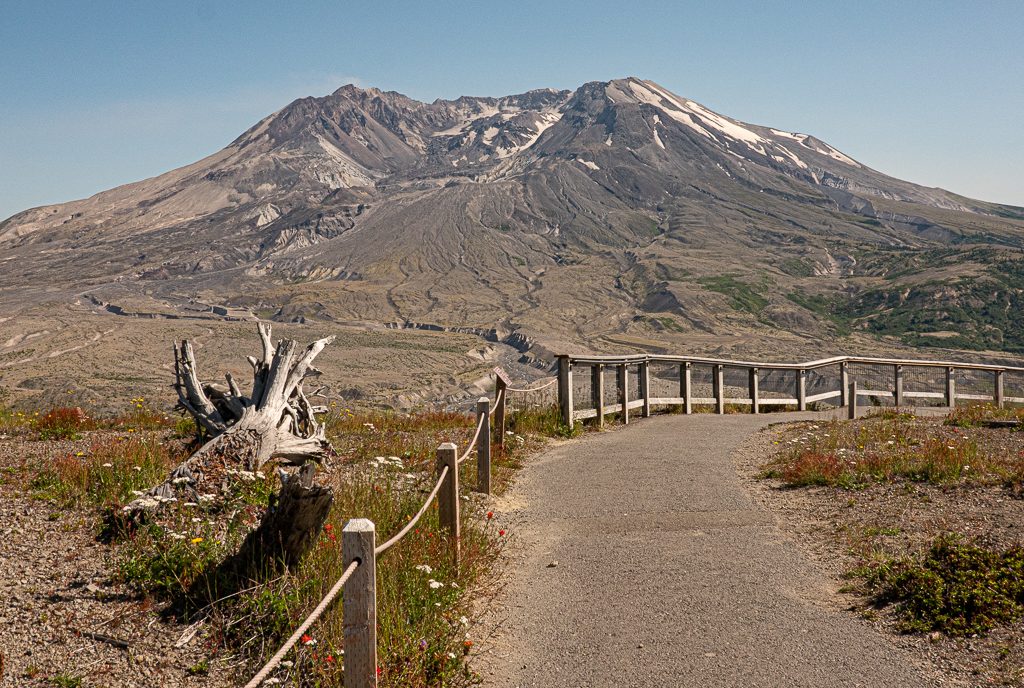 The ship had arrived in Astoria at 11:30 p.m. the previous night, so we had a full day to explore the town and its surroundings. We started the day by taking the ship’s shuttle to the Astoria Column, which towers over Astoria and provides a panoramic view of the ocean, river, and mountains.

After lunch we headed to the Columbia River Maritime Museum and were fascinated to learn about the extreme difficulty of “crossing the bar” at the entrance to the river from the ocean beyond, one of the most dangerous passages in the world.

“At the river’s mouth, millions of gallons of fresh water collide with ocean swells. The resulting waves, enlarged by steady winds and shallow, shifting shoals, can tower 40 feet high…Despite these obstacles, generations of fishermen have braved the bar to be first in line for the inward bound salmon.”

Each ship at the bar must take on a bar pilot whose job it is to guide it safely through the 17-mile danger zone. Watching videos of the bar pilots at work left us in awe of their skill and bravery.

We arrived in Portland on schedule at 2 p.m. Inexcusable that the cruise line deprived us of over a half day of excursions. We had only a quick trip to the historic Vista House (1917), a 45- minute drive away and right near a great number of beautiful waterfalls. This should have been an optional full-day excursion that included the waterfalls. Shame on American Cruise Lines. Lucky for us, Stu and I climbed into our waiting RV the next morning and drove to the waterfalls ourselves.

Though it was a quick trip, we enjoyed visiting the lovely Vista House.

End of Cruise and Beginning of our Next Adventures.  Click here to view our trip from Portland, OR to Salt Lake City, UT via Yellowstone and Grand Tetons