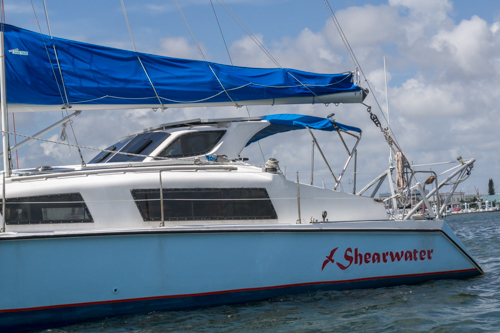 I’ve owned several boats over the years, ranging from a 7′ thing that would not sail upwind to a 43′ Catamaran that carried my crew and me from Cape Town, South Africa to Trinidad.

Shared Pleasure was a nice 35′ sloop designed for club racing and cruising. I owned it with a work friend, Barry Lewis. He adopted her shortly after purchase.

The first Shearwater was a 36′ sloop with comfortable accommodations and a fairly shallow draft designed for cruising in smaller bays and rivers that might be a bit too shallow for many sailboats. The theory is that I would not run aground as often, but it turned out, I just went into thinner water. She served me well for about 15 years as I transitioned from a 16′ Hobie Cat daysailer to a USCG licensed Master who ocean sailed as far as the Virgin Islands on several adventures.

Shearwater became Shearwater II, the beautiful 43′ Voyage Catamaran purchased at the factory in Paarden Island, just outside Cape Town. During the five years I lived aboard, I sailed across the Atlantic to Trinidad and about 23 other countries according to my hard-to-read passport. I also sailed to Cape Cod, Houston (twice), and Bermuda, once on Shearwater II and a second trip as a delivery skipper. Bermuda was the most difficult sailing I encountered.

A planned trip to Europe and the Mediterranean never happened because 9/11 triggered second thoughts from my insurance company and my crew. It seemed safer to stay in our half of the world.

Shearwater II led to a brief stint at home ownership in a nice community in Florida.

Then I adopted Shearwater III, an older Gemini Catamaran in need of lots of love. A year later she had new sails, new interior, new plumbing and new bedding so I set off to sail the East Coast to Washington, DC where she blew an engine. This Gemini was outboard powered so I was able to drift into the nearest marina and motor off the next day with a brand new Mercury outboard.

Engine failures on older boats are common since the engines are infrequently run and sprayed continuously with salt water. A 20+ year old engine served its time and one delay for a new engine install is far better than the weeks I had to spend each time my previous Diesels acted up.

Shearwater III sold in a few days for a fair price temporarily ending our sailing era.