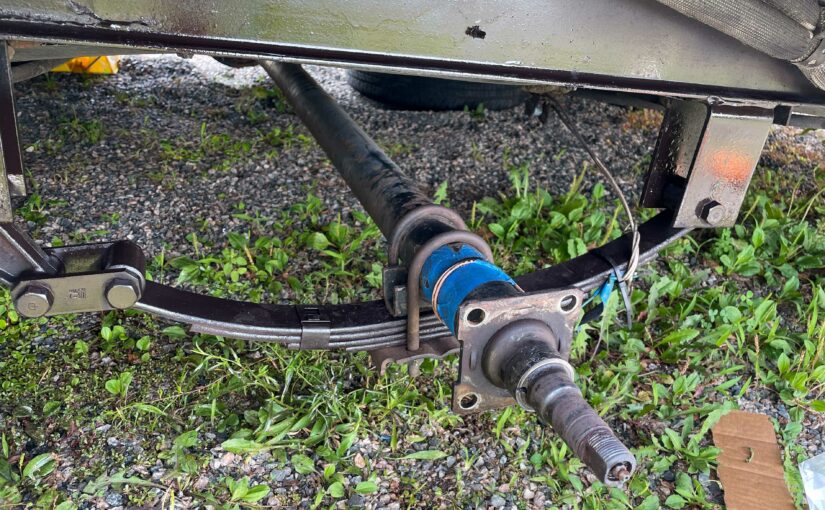 Every RV is built to a price point. Coachman saved a few construction dollars by providing completely adequate but somewhat smaller than normal axles, hub and brakes for our Coachman 204. The two axles rated at 2800 pounds each were more than sufficient for the weight of Winnie and her load, but as a “non-standard” size, they were outside the range of normally stocked repair parts.

We love Winnie so we use her far more than the normal customer who might buy a small travel trailer and let it sit, unused, for much of the year. After completing two cross country trips and getting ready for a third, the tires were worn to the tread and overdue for replacing. Our factory original tires served Winnie well, lasting about 2 years and 25,000 miles or so.

Some searching among the RV Blogs convinced us that Goodyear Endurance tires, at about $75 more than the cheap imitation tires for the set, were the best available. We called a few truck/trailer tire places and found a local shop that could install them and inspect/service the bearings during the installation. Their price was reasonable, the place was neat and clean, and the service adviser was knowing and confident.

Upon inspection they determined the brakes had about 30% remaining life and we were advised to replace them. Since the hubs (the part the brakes rub on) were scored on two wheels from sand and grit getting in the brakes, Stu decided to replace them also. Unfortunately, the service center said there was a six-week to three-month delay in getting the non-standard parts.

So, we trusted luck, had the bearings repacked, and Stu departed on the first leg of our 2021 Summer Adventure. Someplace between New Orleans and Philadelphia where he was scheduled to meet Joan, one bearing failed and the wheel fell nearly off. Stu “discovered” this when a passing motorist honked, lit a match, and waved toward the wheels mouthing FIRE.

Winnie limped into a nearby fast food place, and Stu went back to see smoke coming from one wheel – never a good sign.

This is what he found:

While it was clear there was serious damage, it wasn’t clear how serious until Stu took off the tire and wheel to expose the remaining bearings and brakes. One bearing, part of the retaining nut, and part of the axle had melted and just disappeared in the smoke.

A very nice man, working on the building’s air conditioning next door, climbed down off the roof and walked over with some heavy duty tools saying, “can I help?” Together we removed the hub and bearings and inspected the damaged axle, noting that if we could not find a replacement, we could make it work. The man then called around and found the parts at a nearby NAPA parts store.

Here is a photograph of what we found: Melted and missing bearings, scored drums, partially melted brakes and torn up internal parts. Most likely the damage was initially caused by over tightening the retaining nut at the previous inspection.

There wasn’t much doubt as to the source of the noise. Look at the nut in the bottom of the above photo, it is worn nearly through and a piece of the retaining ring is fused to the nut.

The good luck continued. Not only did the store have the bearings, the store supervisor drove out the damaged bearing and pressed in the new one using tools I did not have. He charged only for the parts and gave us a discount on their price. It was hard to find the right words to thank him.

Unfortunately, a critical washer used only on the 2800 pound axle was unavailable so the first nice man fabricated one the best he could with the available parts.

Back on the road again, I was able to drive into Philadelphia, get set up in camp, clean up Winnie and meet Joan’s airplane as scheduled.

Joan and I visited Philadelphia and continued to New York with several intermediate stops as Winnie progressed on 3 original wheels and one patched wheel. At each opportunity we looked for the original design replacement parts, knowing that the slightly damaged (sprained ankle) axle would not last indefinitely.

From New York, we were heading toward North Carolina when the dreaded axle noise started again. Stu pulled into a Walmart to inspect the axle when Joan spotted in the rearview window that the wheel had fallen and was rolling by Winnie as she stopped in the parking lot.

The axle was damaged beyond repair this time.

We were faced with a limited set of choices. Stu felt Winnie could drive slowly on the remaining good axle to the closest RV site to effect repairs. Joan did her magic and found us an RV site about 40 miles away, nearly in sight of the Statue of Liberty in Jersey City.

Some time on the phone and web produced an order to Etrailer for a replacement axle, two new replacement hubs, two sets of bearings and the hardware necessary for the install. Knowing the original 2800 pound axle had a very long lead time (Etrailer quoted 6+ months), we elected to upgrade to the 3500 pound set, about $75 more from Etrailer.

During the phone call with the Etrailer sales person, I emailed her a photo of the axle part label showing the original Dexter Part Number and most importantly, the distance between the two wheels (called Hub Faces) and the two springs (called Spring Distance). Dexter has previously told me the 2800 pound and 3500 pound axles were the same size and bolt identical so I could just bolt on the new one.

Dexter also explained there was no difficulty mixing 2800 pound and 3500 pound axles but the overall weight capability of Winnie would not increase unless both axles were replaced.

The order was placed early on a Saturday and Etrailer said it would ship by 8 a.m. on Monday. No problem, we took the ferry to New York, toured the 9/`11 memorial site and cruised around the Statue of Liberty. A great place to be stuck waiting for parts.

Late on Saturday, Etrailer emailed me the bill of materials. They were shipping the wrong axle – it would not fit the springs on Winnie and was too long to go between the fenders. Stu called and emailed them and the salesperson assured me the parts being shipped would fit. They refused to cancel the order and refused my repeated requests to speak with a supervisor.

Sure enough, when just over $1003 worth of parts arrived, the axel was far too long for Winnie, like shoes, bigger isn’t necessarily better. I called immediately, finally reached a supervisor and she issued me a Return Material Authorization and a label. The order came in two very large boxes so I asked for two labels. I should have asked for another supervisor, but how was I to know that UPS requires a unique label for each box. Makes sense in hindsight since the shipments are tracked by label number. The returned parts were partially delivered after some explaining and sorting. Etrailer originally refunded about 15% of my $1003 purchase.

Bank of America supported the resultant dispute with a temporary credit and Etrailer eventually refunded my money.

So we were still stuck in Jersey City with the date for a family celebration in Charlotte and then Greenville approaching.

Joan came to the rescue again. She found a trailer parts place on the way about 50 miles south that had most of the parts.

We drove there, arriving late afternoon to find the place specialized in boat and utility trailers and wasn’t interested in selling us the parts we needed since we are a recreational vehicle but not a boat or utility trailer. Fortunately, the mechanic inspected the trailer and pointed us to Franklin Trailer in Summerville, NJ, another 60 miles south, almost along the route and accessible by roads that permitted the lower speeds we could maintain on the one good axle.

Franklin Trailer was a dream come true. They had all the parts we needed but were even better than that. Tony Senior, the owner, came out to speak with Joan while Stu was paying for the parts. He explained that while Stu could bolt on the new parts, we would sleep better if their mechanic did the work.

Wow, we agreed immediately, and he called another mechanic and found someone willing to work through dinner to fabricate the exact axle we needed, remove the damaged parts, install a new 3500 pound axle, hub and brake set, and just for good measure, remove the other two hubs to inspect the remaining axle that had worked so hard to get us to Franklin Trailer.

All pronounced good, they charged us just over one half the etrailer price for the wrong parts. They even pointed us at a nice place to enjoy dinner, calling Stu just as we paid the dinner bill to tell us we were ready to go.

The mechanic was waiting when we returned from dinner to tell us what he had done, explain that our remaining old axle was good for several thousand more miles and wish us a safe trip. We asked him to fabricate a second axle set for us to ship home so we could install it when we got back to Delray Beach.

He built the second axle and the correct brake kit perfectly; the second axle easily bolted into place. Exclusive of the camping near the Statue of Liberty (a place we will return to after this trip), the repair cost us about $1200 and resulted in two 3500 pound axle sets that are more easily serviced since they are a standard size. The new brakes are larger and thus stop more smoothly than the factory original set.

If you ever need an axle, brake assembly, bearings or anything related to the running gear on your trailer, Franklin Trailer is the place to go. The sales and service people know the hardware on your trailer, stock or can build nearly everything to make the necessary repairs, and can help you work the issues that may develop.

If you happen to be near Somerville, NJ, they have excellent mechanics who work with a smile.

And they are nice people!