Shearwater IV has been living until recently in Pennell’s Marine, a dry stack facility that takes the boat out of the water when we are not enjoying her. There is a low railroad bridge just below the marina that limits our entry and exit to times other than high tide.  Because of the rains this past we relocated her to a slip in Boynton Beach.

We left the dock about 11 a.m., too late for the low-tide cycle this trip, so we anchored above the bridge until just after 2:00 pm when the water dipped enough for us to squeak under.

We traveled the familiar route South on the Intracoastal Waterway (ICW) through the Fort Lauderdale area to Hollywood, where we docked in the Hollywood Municipal Marina for the night. After docking, we walked to the beachfront boardwalk, attended  a free Jimmy Buffett music concert,  dodged the little kids on recumbent bicycles, and picked up a UBER ride for the trip back to the marina. Quiet and relaxing evening. 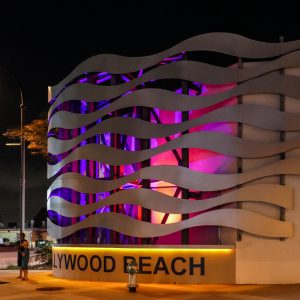 We traveled through the Miami area, having stayed there on several previous trips. The area at the very beginning of the Keys was hit hard by Hurricane Irma, leaving many of the businesses closed for repairs.  Fortunately, we were able to pick up fuel and water at Gilbert’s Marina, although many of their facilities were damaged and closed.

Just across the ICW, we were able to obtain dockage with electricity for our air conditioning and a grill for our rack of lamb. We also enjoyed their pool and hot tub. Kind of a windy night. 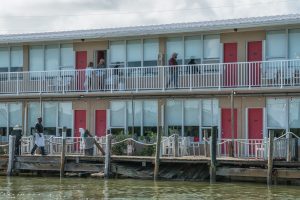 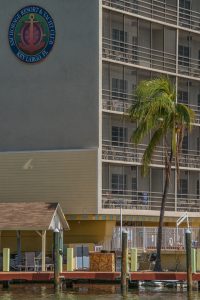 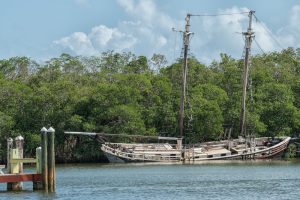 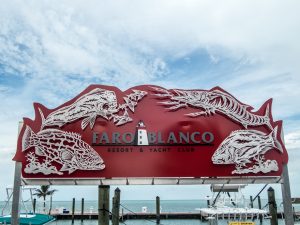 Faro Blanco is a modern, very clean marina on the West end of Marathon. We enjoyed excellent dockhands with modern, comfortable docks that permitted us to step directly out of the cockpit onto the dock. 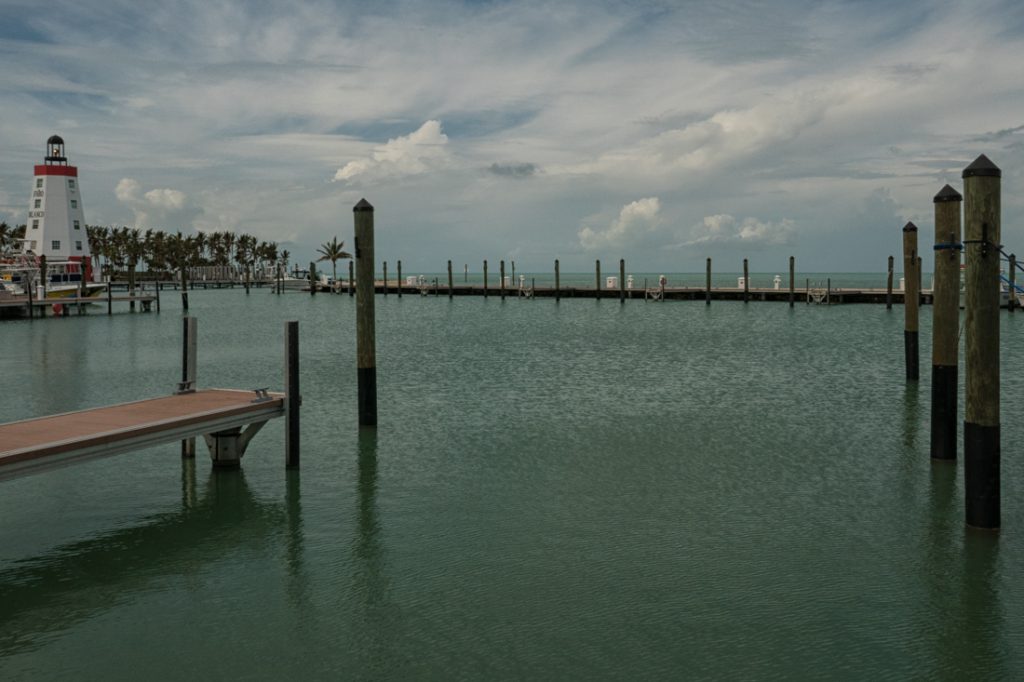 There was mile after mile of hurricane debris along the highway (including furniture and doors) from the devastated homes, especially the hundreds of mobile homes that were flooded. Much damage is waiting to be repaired. 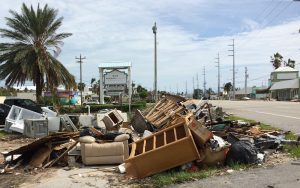 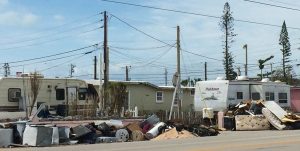 While in Marathon, we visited our next door neighbor, the Turtle Hospital. They are dedicated to restoring the health of turtles that have been injured by propellers, bitten by sharks, or diseased from pollution or natural causes. 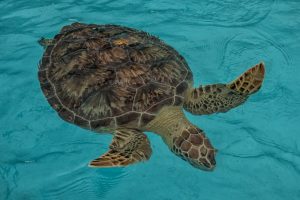 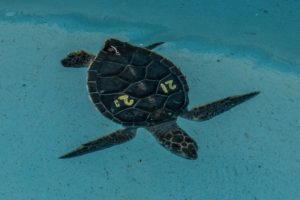 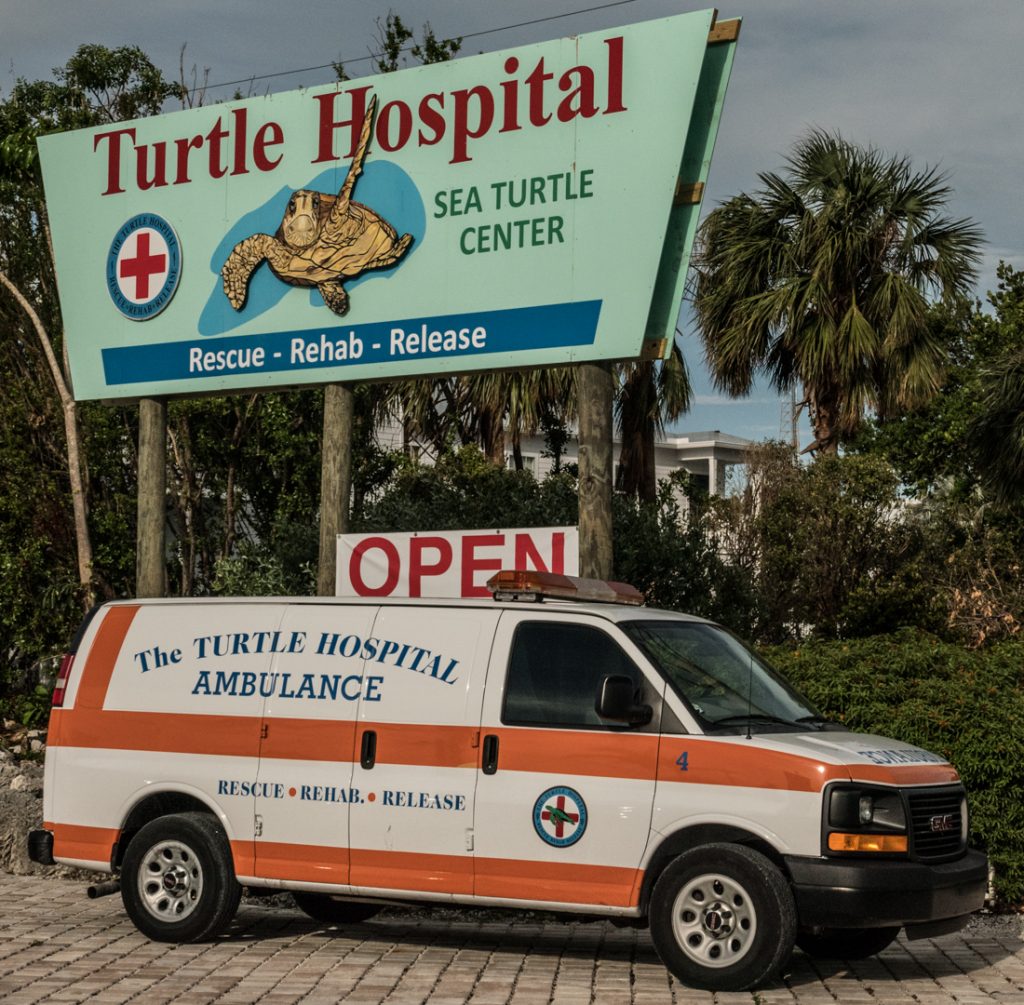 We continued our visit the next day with an attempt to see the Marathon Aquarium, unfortunately severely damaged by Irma and closed. 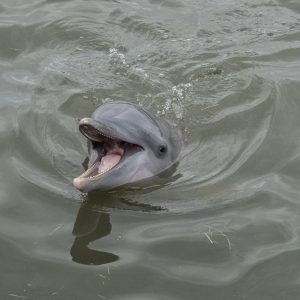 on Grassy Key, just East of Marathon. Joan called, found them open, and off we went.  Donald saved the day. The Dolphin Research Center provided a series of 45 minute or so programs outside at the dolphin and sea lion tanks and inside in the Dolphin Theater. 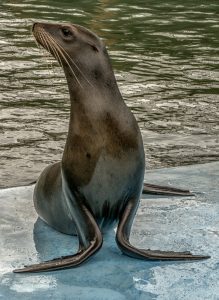 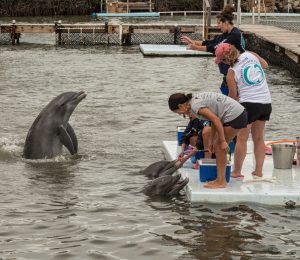 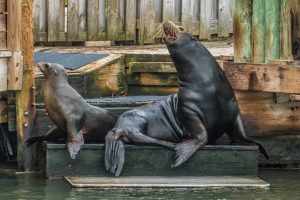 The dolphins could easily jump the fences and go free – out to sea – but none has ever left. The keepers say why would they leave. They get room service feedings 3 times a day and an abundance of TLC from the staff, as well as visiting audiences every day to watch them perform with pride.

Joan requested that the 3 dolphins we were watching jump together. The keeper said we could ask them (not tell them) to do so, and she taught us the signals so we, the audience, could make our request together – one finger straight up (when we had the attention of all 3) and then moving our hands in a circle. The 3 dolphins swam out to the center and proceeded to do a three-dolphin jump and flip. Quite a sight! 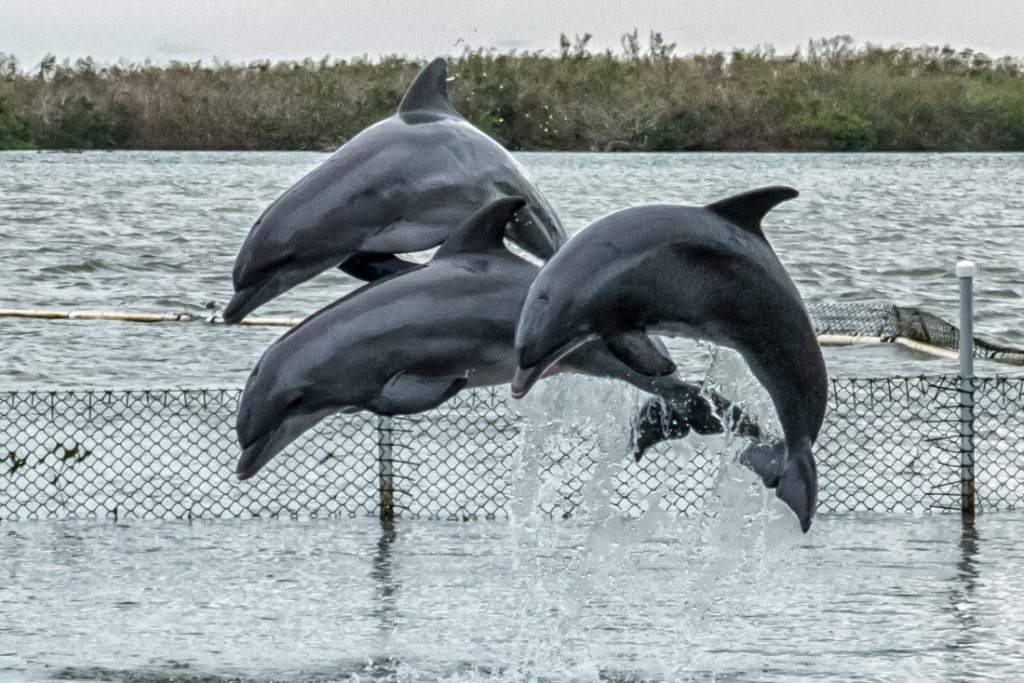 We really enjoyed the unexpected visit with the dolphins.

We had a 50-mile fairly comfortable ride West on Hawk Channel to Key West.  Hawk Channel is a 100-mile channel partially protected from the Atlantic Ocean by a series of natural reefs, the longest in North America. For most of the trip, the wind was blowing across the land, artificially flattening the seas and giving us a mostly dry ride.

Key West celebrates Halloween with a week-long celebration:  Fantasy Fest. This year’s theme is “Future.” The theme is incorporated into many of the costumes and floats.

Friday night, Key West goes sort of nuts with street vendors, costumes (many just body paint or less), and some music. We took lots of photos of the Costume Parade; click here to view some.

The main parade, the Fantasy Fest, has every hotel room and inch of viewing route full. Seats in adjacent buildings go from between $50 to $200 for a seat with dinner and drinks topping out at $1000. We enjoyed the view from the streets. To see some of our photographs, click here.