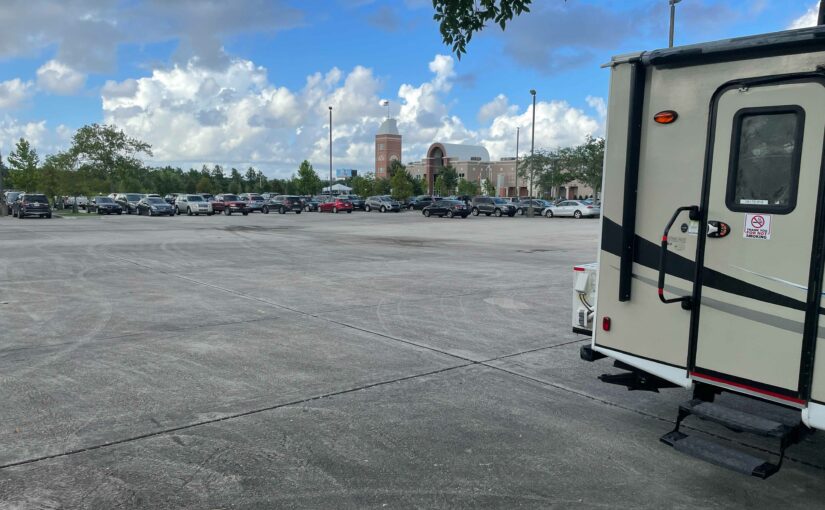 One of the more expensive aspects of traveling by RV is, next to fuel, the charges for the nightly stops. Since adopting Winnie, Joan and Stu have been reading about less expensive places to stop since we need no amenities and sometimes do not even leave our rig except to exit the car and get into Winnie, our trailer.

We have stayed at Walmarts when the campgrounds were full, we have looked at chain restaurants but were continuing to look for the perfect solution. Harvest Hosts is that solution. For a fixed, modest, yearly fee they provide a map-directed web site and search engine to help locate free sites along the way. On this trip, split into 3 legs, I was able to reserve sites where I arrived in time to set up, relax and have dinner.

Harvest sites are sometime remote and fairly isolated. The first night, June 25, I stayed at Goodwater Vineyards in Tennessee. It must have been off season. The site was annotated by a hand written 18′-long board nailed to a post. After a 45 minute “U” turn I noticed a camping van in an open field and drove in. The couple greeted me, said they were traveling from Canada and had no idea where to check in, but they saw the tracks and decided it was OK. There was no internet, no facilities, and nothing but open space in a field.  Two days of off and on rain raised some flies so I turned on my new air conditioning, had a light dinner and fell asleep, waking the next morning to a beautiful sunrise.

The second day, June 26, found me near the French Quarter in New Orleans. My reservation was at the Faubourg Brewery and frankly I was hoping for a little more life than the first night. It was better than anyone could expect. The brewery is a working beer brewery, tasting area, and “bar food” restaurant.

Faubourg Brewery is clearly family oriented. The two guards primarily help keep the many young kids from getting too far from their parents. There are playgrounds, yard games, clean rest rooms and everything including the dry camping and live entertainment on weekends is free.

The menu is inexpensive and leans toward what I call exotic bar food, superior grits, fish selections, salads and the usual. 5 star bar food such as hamburgers. I had the “dirty” grits with a variety of sausages and veggies mixed in a nice sauce. Among the many best parts are the grounds posted, “No Smoking.”

I continued on to Beaumont, TX for the third night, January June 27. There was nearly nothing to see. Harvest Hosts directed me to the Pour Brothers Brewing Company in Beaumont. When I arrived, there was a very large parking lot, empty except for two idle generator trucks and some lights. I called the contact number and was directed to a parking area. There were three restaurants, a police station with some officers who smiled at me, and dozens of empty stores and buildings.

During my walk around town, I found some folks leaving a church.  They were all very pleasant but were from “out of town” and didn’t know why everything, including the other churches, were empty on a Sunday evening. I can only hope they didn’t all leave because they knew I was coming. Everywhere I looked, there was nothing to see except for a singular wall decorated with a colorful mermaid. 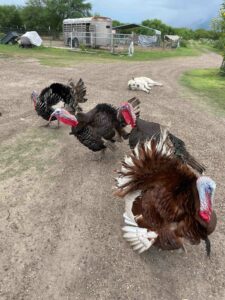 The final night of driving, June 28, found me in West Texas in the small town of Lake. I had reserved camping at the Gulf Breeze Alpaca Ranch and Lodging. It was off season; the owners and the Alpaca along with some pedigree turkeys, a horse, many dogs, and some sheep welcomed me to an empty field with a view. Quiet night.

After several days of quiet driving, Stu settled into Isla Blanca county park on South Padre Island, chosen to be near Shirley and her family who are visiting to a resort nearby for a vacation.

Since this trip spans July 4th, Isla Blanca is full beginning July 2 so Stu will be camping just a few blocks away at Andy Bowie park, the first few days with power followed by a few days to finish testing the new generator and air conditioning. The camping was split into two halves, the first few days I was in Isla Blanca park, a short walk down the beach from Shirley’s family. I had to move to Andy Bowie park, just down the road because the first was full. My last few days were planned without electric power because all the utility sites were full. Fortunately, there was a power pole about 100 feet from my site so I just plugged in.

The campgrounds were my base to visit Shirley and her family while they visited S. Padre Island. You can enjoy our visit with Shirley’s family at S. Padre Island by clicking here.

From S. Padre, we moved toward Austin where we met up with Rebecca and her family at McKinney Falls State Park. McKinney Falls is a lovely, quiet park with two swimming “holes” located on small waterfalls.  Enjoy our visit to Austin by Clicking Here.

Enjoy the second leg of our 2021 Summer trip from Austin to Philadelphia by clicking here.