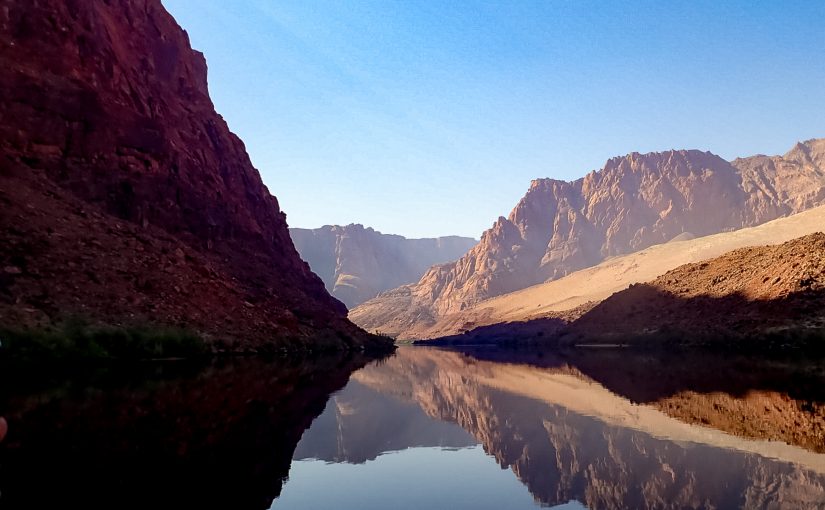 The trip home began in Salt Lake City when Joan flew home to Florida to catch up on business after a month of travel.  With careful coordination and blind luck, Shirley flew into the same terminal at about the same time to join me for this leg of the trip.

It was hard to say a temporary goodby to Joan, and the anticipation of driving to see Justin and his girlfriend Nicole Weigelt was a nice diversion. Turned into an excellent and exciting leg.

Our original plan to drive from Salt Lake to Tempe changed somewhat when Justin and Nicole “volunteered” to meet us part way by bus.  Our new plan was to link up in Flagstaff – which we did, again successfully, and use the extra day to raft the Grand Canyon.

Turns out the shortest raft trip was three very serious days. I found a compromise Kayak trip on the upper Colorado just below Glen Canyon dam. Everyone settled for the “lesser” trip so I hired a guide to take our rented inflatable kayaks and my Kayak, soon to be named Tidy Bowl to the Glen Canyon spillway below Lake Tahoe.

We boarded the guide boat, stowed our gear (lunch and water) and off we went up the river.

Our thoughts moderated when we encountered the cold air. The night before the trip it was well over 100 degrees and we had no electricity and thus no air conditioning.  A few minutes after the boat stated upstream, we were in 25 knot wind at 50 degrees. No longer hot.

The view as we went up the first rapids, salmon style, reminded me of the movie of the first trip to transit the Grand Canyon, where three of the crew decided to walk out due to fear of the rapids. They were never seen again.

I had mixed feelings as we saw the Glen Canyon Dam. First, the boat stopped and we were in the sun, starting to thaw. Second was, “I hope the dam holds!”

The guide took us to shore, assembled the two rented inflatable kayaks, gave us life jackets and paddles and said “The river isn’t very busy today, there are no guides on the water, be careful.”  We took off downstream on our own.

Shades of the Mullica River Trips, we couldn’t get lost – everything was downstream. While parts looked easy, there were several rapids that looked concerning on the way up and turned out to be scary on the way down.

We had never seen inflatable kayaks perform. Turned out they were comfortable, stable, and very fast. My lightweight kayak was fine in tight places but in large open stretches, it took constant attention to stay in line.

At one point, we transited a set of eddy currents causing whirlpools to form.  I was taken into two in a row and caught in the second whirlpool. Tidy Bowl spun and out I fell out of the boat and into the 50 degree water. My life jacket was securely strapped to the back of the boat.

The rest of the family rescued me: Justin jumped in to pull me from the eddy, Nicole reached out with a life jacket and dragged me to her boat while Shirley went after the paddle.

It was easier to board my kayak near shore so I hung on while Justin paddled out of the rapids into a calm area where we reboarded our original kayaks.

In the meantime Shirley came over to shore where she urged me to try her inflatable while she braved my rigid kayak. We continued this way until lunch when we swapped back to our original boats.

The Glen Canyon leg was more exciting than we expected.

Justin and his friend Nicole went as far as Tempe where they left to get ready to return to school.  Shirley and I proceeded toward Austin where we met up with Josh at Rebecca’s home. Shirley made her way home to prepare to start working as a newly promoted director at her hospital.

The cold water of the Colorado in Glen Canyon made for a “stunning” experience when I fell out of my Kayak in a whirlpool and Justin immediately jumped in to the rescue. The near-danger of the experienced prompt Shirley to discuss, and I’m guessing, dramatize the incident sufficiently that they decided to get me inflatable kayak similar to the excellent boats we rented. Challenger was very stable, much easier to paddle than Tidy Bowl and light enough to easily carry up and down the hill to the campsite at Lazy L & L.

The last few visits to Austin have been in various RVs, ultimately resulting in the purchase of Winnie, our current home on wheels when we travel. Rebecca pointed us at this lovely city park located on the shores of the Colorado River, about 20 minutes from her home. We have stayed there on every subsequent trip, extending our camping visit to include two long days of kayaking from the front of our campsite.

One of many high points of the visit was diner at Miguel and Rebecca’s followed by a swim in their pool with Sierra. She is a happy swimmer, full of smiles and the confidence that comes from years of pool time and swimming lessons.

I went on to the Lazy L&L RV Campground with Winnie and prepared for a day of tubing by checking water level.  There are two major tubing rivers in the area:  I was camped on the Guadalupe, the larger river, and the other is the Comal, much smaller and spring fed. 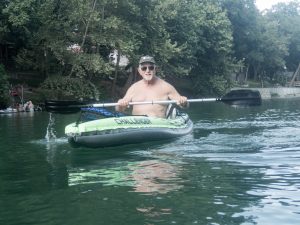 In sort of a flashback: The cold water of the Colorado in Glen Canyon made for a “stunning” experience when I fell out of my Kayak in a whirlpool and Justin immediately jumped in to the rescue. The near-danger of the experienced prompt Shirley to discuss, and I’m guessing, dramatize the incident sufficiently that they decided to get me inflatable kayak similar to the excellent boats we rented. Challenger was very stable, much easier to paddle than Tidy Bowl and light enough to easily carry up and down the hill to the campsite at Lazy L & L. (I’m not exactly sure where to put this, the photo was from the L&L, but the kayak was germinated on the Glen.  Anyway, thank you!!!)

After asking around the campground, I found that the Guadalupe was very low due to Summer drought while  the Comal was at normal levels.  After a quick family conference, we decided to run to Comal.

In the meantime, Joshua bicycled the 65 miles from Austin to New Braunfels where I was camping while Stephanie, Jacob and Shirley drove there. We packed up and went to the Rockin R River office nearest our camping location – so we thought. It was right across from the Comal River Tubing location. We felt sure we would be doing the Comel.

We are still not sure which river we ran. It was a comfortable temperature, had lots of shade, moved along OK but didn’t look at all like the Comel we had done in previous years. Everything was fine and we all enjoyed the trip and survived the sun and occasional bottom bumps.

After tubing, Steph and Shirley went back to their respective homes while Josh and Jacob stayed with Winnie and I in the campground. We shared a “camping meal” of chicken breast, wild rice and salad grilled (except the salad, I guess) on a camp stove and shared with the few bugs that survived the lack of rain and extreme dust.

Sierra was the delight of the day we shared at the major Schlitterbahn water park in New Braunfels, Texas. At three years old, she completely trusts Rebecca as we climb the stairs to the long chutes the park does so well. Huge smiles greeted every adventure as we bounded from side to side and flew over waterfalls.

I was especially excited to see her assert herself whenever we went by a ride more in her scale as she climbed, slid, and swam the kiddie rides. Sierra had more energy than any of us. I’m not sure she has memories of last year’s Schlitterbahn adventure but this year she climbed the steps, boarded the tube, and snapped on her life jacket with a big smile.

After Schlitterbahn, I said goodbye for now to my Austin family, and headed for New Orleans, where I will meet Joan’s flight on Sept. 1.