The thought of sleeping in the same place each night is finally drawing me toward home. After several days in Austin, Winnie and I moved to the New Orleans area and settled down in the French Quarter RV Campground. It was a bit of “wilderness” in the middle of the city, located just about 3 blocks from the tourist highlights, the campground is walled off to keep the noise and the city on the outside.

I met Joan’s flight at the New Orleans airport yesterday, and we will share the last leg of this trip.

New Orleans is known for interesting and tasty food. Think of Cajun Spicy Crawfish, Jambalaya, a one-pot recipe with chicken, andouille sausage, shrimp and rice all mixed together and served with lots of beer. These spicy dinners leave me craving for a breakfast that soothes my mouth and lets my stomach relax without the fear of another spice. New Orleans locals have a different material in their insides. They crave the spice.

I look forward to the beignets, the exact opposite of spice, they are made of sugar, flour, and oil and have the taste and scent of a decadent breakfast.

Cafe du Monde serves nearly nothing but beignets  and coffee with chicory, a caffeine-free addition to coffee that gives it a special New Orleans taste. They are so crowded, the line extends for blocks, even during the week. 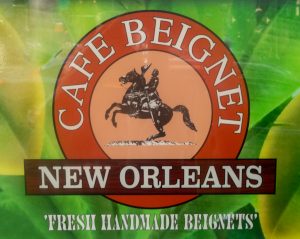 well known and serves the same recipe beignets for somewhat less money. Better still, they are not terribly crowded and also serve a variety of breakfast selections including the crawfish omelette associated with New Orleans, Joan’s favorite. We enjoyed our breakfast there.

After our fill of Beignets and breakfast, we continued to the Audubon Society Insectarium and butterfly garden. This was my first visit to this special place. It was also our first taste test of Chirp Cookies made with Crickets. They were quite tasty except for the legs. 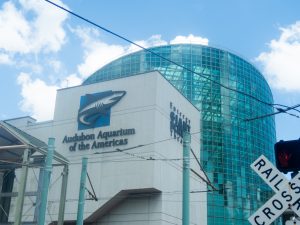 The Audubon Society Aquarium attracts many visitors every day.  If is nearly as popular as the Audubon Zoo and far more popular than the Insectarium. Each time I visit the aquarium, I see new exhibits, new fish, and new movies. Both Joan and I liked the Insectarium better for its variety and the presentation technique of showing the insects in the setting where they seemed to belong.

The aquarium location with a commanding view of the waterfront draws us there every time we visit the city.

My favorite are the tiny seahorses. They are  slow swimmers that use color to blend into the background. They even look sort of like a horse. This male seahorse is carrying the couple’s babies in a special pouch near his stomach.

Joan took a day off from the fun to fight a cold she had acquired on the flight. Tidy Bowl (my kayak) and I decided to run the small river created by Weeki Wachee spring. The state park has excluded development, cleaned up all the debris and created a 7 mile kayak heaven.