We ventured into the heart of the United States from September 28, 2015 to October 5, chartering a houseboat from Fun in the Sun Houseboats.  It was cold, far colder than we expected, dropping to 39 degrees several nights.

The boat was an interesting experience, click here for some photographs and details and photos of our trip on the Mississippi.

Fun N The Sun Houseboat Vacations in Great River Harbor, 3 mi. south of Alma, Wisconsin – slept on boat but froze, ,alleged 13cf frig was tiny, boat in bad condition but we decided to stay – in harbor first night, 8pm called mgr from his dock  to tell him that toilet wasn’t working – he said he’d fix it in the morning! Dinner – pizza

Alma is a 2-tiered town – 5 restaurants all closed – back to boat for drumsticks and salad dinner.

9-30 through Lock 4 to temporary docking at Wabasha city dock, right in front of National Eagle Center and main part of downtown, all decorated for OctoberFest?

Docked at Dan’s Pepin Marina – at the south end of Lake Pepin.

Wonderful dinner at the Nook, overlooking the Miss. River.

Oct. 4 boat back to Great River Harbor – to return in morning on Oct. 5

Oct. 5 turned in the boat

Drover the Great River Road and lots of side roads – beautiful drive through farm country – to airport. Stopped at Prescott Visitor Center, Prescott, WI along the way.

The Mississippi drainage basin draws from 31 states and two provinces in Canada. It drains 40% of the continental United States. The basin extends from the Appalachian Mountains in the east to the Rocky Mountains in the west. Within the basin are impressive size rivers that have tributaries carrying water from great distances. From each tiny stream to the giant river itself, the waterways are seeking sea level. All converge into the main trunk of the lower Mississippi River. One could put a note in a bottle and place it in a tiny brook in western New York. That bottle could drift down the brook and enter the Allegheny River, then into the Ohio River at Pittsburgh. It could follow the Ohio River to the Mississippi River at its confluence at Cairo, Illinois. From there it could eventually pass by New Orleans and drift into the Gulf of Mexico. Once in the Gulf it would be possible for someone to find and read the note in Florida, or as far away as Africa. The Ottawa Indians called it the Mississippi, the Chippewa called it Meze-Zebe, and the Kickapoo named it Mechas-Sepua. All translate to mean “Large River” or “Great River.” The official source of the Mississippi River is Lake Itasca in northern Minnesota. On a visit to the lake I waded across the 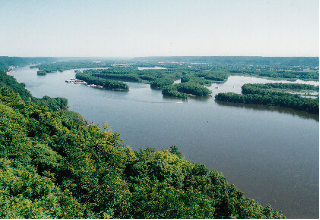 Mississippi as it flowed from the lake over the shallow rocks. Not far from Lake Itasca is Elk Lake, with an overflow leading into Lake Itasca. I wondered why Elk Lake isn’t considered the true source, but I am not one to start any trouble so I’ll leave it at that. Itasca means “true head”, so that’s good enough for me.

Making the upper Mississippi River navigable required the building of many locks and dams along the way. Before the dams, the river would simply run out of navigable water. The lower Mississippi, below Saint Louis, has no dams. The swift currents, aided by wing dams, cause a channel to be scoured out, which remains deep most of the time. The land is flat and is not suitable for building dams, as the water needs to back up into a valley behind a dam. Most rivers get wider toward the mouth, but the Mississippi actually narrows as it flows to the sea. One of the reasons is that it has been confined by levees. It is carrying huge amounts of water but is very deep, around 200 feet at New Orleans. The widest part of the river is on the Upper Mississippi, near Red Wing, Minnesota. The sand and silt pouring into the Mississippi from the Chippewa River built a natural dam, closing it off and forming a natural lake over two miles wide. The water backed up for many miles until the river broke through, cutting its present-day channel and creating Lake Pepin. Following are some interesting features about the Mississippi River that I have found during my many travels on the “Great River”.

In the natural order of things the Mississippi could be divided in three sections since the part of the upper river from the source to Minneapolis is non-navigable and has a much different character than the river below Minneapolis. For that reason, I’ll call this the Headwaters Section, even though it is 482 miles from Itasca to the Coon Rapids Dam at Minneapolis. It is just below this dam that the river becomes a navigable waterway. That is not to say that the headwater section is not navigable. Many have canoed and kayaked these waters, including myself. It is a beautiful section of river with marshes, lakes and wildlife. There are some obstacles to overcome including lowhead dams and the fact that one could actually get lost in areas where the grasses grow so tall and thick that it is often difficult to know where the river actually is. The river is also braided in some areas, making it difficult to know which course to take. It is fascinating to paddle this tiny waterway knowing that it is the beginning of a 2,253 mile-long waterway that eventually becomes a giant river leading to the Gulf of Mexico. Shown below are the beginning of the river, the headwaters area and St. Anthony Falls Lock & Dam at Minneapolis.

River mile 865 marks the head of navigation. From this point going downriver, a channel is maintained by the U.S. Army Corp of Engineers, keeping it deep enough for commercial traffic all the way to the sea. From this point on, not only paddlers can enjoy the river, but so can any size of pleasure craft. The mile marks go upriver so mile zero is at the lower end of the upper Mississippi River at Cairo, IL. In all there are 29 locks to pass through on the upper Mississippi River. The first being at St. Anthony Falls at Minneapolis and the last one is just above St. Louis. The upper Mississippi has spots of industry, particularly near the larger cities, but is mostly a beautiful river with great “river friendly” towns along the shores. At the confluence of the St. Croix River, the Mississippi becomes what most people would consider a large river. It is the vast influx of tributaries from the huge drain basin that makes the Mississippi a major river. The farther it flows, the more rivers and streams flow into it. For those wanting to travel the Mississippi in a private boat, there are many sources of information to help make it a safe and enjoyable journey. There are currently no comprehensive guidebooks, but first on the list are the U.S. Army Corp of Engineers charts. They can be purchased in book form or on a printable format CD. Google Earth is also helpful to locate supply, food and marina locations. There are plenty of islands and remote locations to anchor, tie off or camp. It is also important to understand locking procedures. Locks are not difficult to pass through as long as a few basic steps are taken. Photos below are the Delta Queen at St. Paul, Upper Mississippi backwaters, citizens greeting the Delta Queen at LaCrosse and the Quincy Illinois riverfront.

The upper Mississippi River towns are easy to access from a boat and most embrace their river heritage. Some of my favorites are Red Wing Minnesota, Wabasha Minnesota, LaCrosse Wisconsin, Prairie Du Chien Wisconsin and Dubuque Iowa. When I use the term “River Friendly” with regard to towns I am speaking of communities that have a beautiful riverfront and make their town accessible to boaters with docks and an easy walk into town. With the exception of during high water, the river a fairly clear and appears as blue as ocean water. This suddenly changes at the confluence of the Missouri River (Big Muddy) at mile 195.3. It is the influence of the Missouri River that gives the Mississippi River the brown color and also causes a considerable increase in size. Just past this point is the Chain of Rocks Canal that leads to the last downriver lock on the Mississippi River. It is a free-flowing river from this point to the Gulf of Mexico. Saint Louis is an impressive looking city from the river with much to offer to a visitor by land but unfortunately the city has turned it’s back on the very river that is responsible for its growth. At one time in recent history there were excursion boats, floating restaurants and landing docks but they are all gone, leaving no place to dock a boat to visit the city. I hope that one day the city will realize that they are “missing the boat” and improve their riverfront. Once past Saint Louis, downriver boaters will have 180 more miles to before entering the lower Mississippi River. The most noticeable thing is the increase in current. This is due to there being no dams and the many rock wing dikes that direct the flow toward a more narrow channel in order to let the current keep the channel scoured out. It is an action much like squeezing a hose. The same amount of water coming through a narrower space will increase the speed of the water.